Justin Bailey recently built this masonry heater in Tesuque, NM. Bailey is one of the only contractors in The Southwest that offers design/build services for this type of fireplace, sometimes called a masonry stove.

Bailey, owner of Baileys Chimney, LLC, is New Mexico’s only member of the Masonry Heater Association, an international organization. He attends the MHA annual meeting every year in Wildacres, A retreat center on top of a mountain near the Blue Ridge Parkway. The annual meeting is a festive, educational event that lasts for one week. 120 Masonry Heater builders, designers and enthusiasts from a dozen countries gather to build heaters, share knowledge and expertise, and test new Heater designs.

Masonry heaters channel the flue gasses through passageways in the core of the heater so the mass absorbs the heat. One fire a day In this heater, and the house will stay warm 24/7. When the flue gasses leave the fire chamber they are over 1500 degrees, and when they leave the heater they are only 300 degrees F. All that heat remains trapped in the heater, which provides radiant heat to the room over time.

The warmth from a masonry heater tends to put people into a meditative, peaceful state. People say it “warms your bones.”

Masonry heaters are the most efficient way to heat with wood, if you measure the percentage of the energy in the fuel that gets converted to warmth in the room.

If you are interested in a custom masonry heater for your home, give Bailey a call. 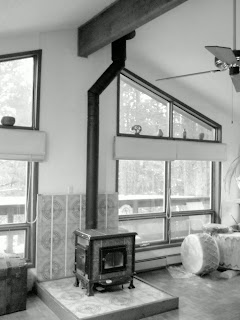