Sam Cartwright is one of our sweeps in training to become a certified tech. He has a wealth of home improvement and building trades experience, starting with his first job at age 15 as a handyman’s helper. He also enjoys fixing cars. We are really excited to work with him because he focuses his attention like a laser and retains complex information and instructions, and has an outstanding work ethic. Our work days are often long, and the work can be hard and presents us with new challenges and opportunities to solve difficult problems on a daily basis. We love to work with people like Sam who relish the flow state that comes from doing challenging, meaningful work. 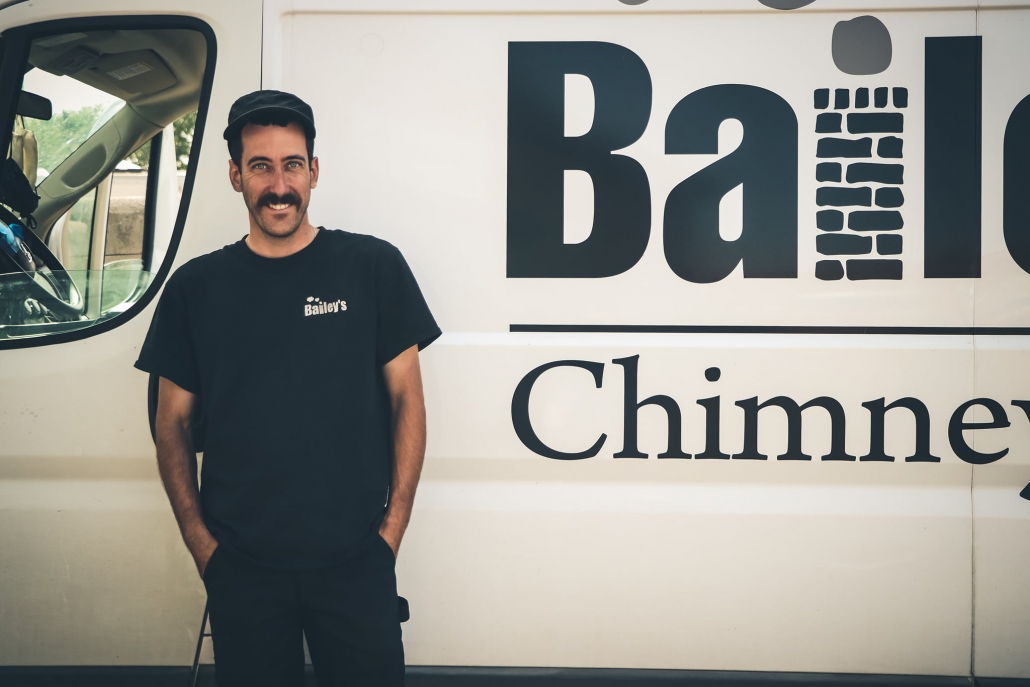 Ben Nuhn brings a wealth of creative and technical knowledge and experience to Bailey’s. We like to hire creative people with technical expertise, because they tend to have lots of practice focussing their attention like a laser to accomplish a task, which enables them to easily enter the “flow” state. Another one of our outstanding new hires on track to become a certified tech, Ben hails from Austin, TX, and is fun to work with because while on the drive to the job he can tell stories about all kinds of great underground songwriters from Austin.

On his second or third day we stacked and assembled 6 sets of scaffolding in a single tower, which we ratcheted to the chimney to keep it (the scaffold) from falling over.

John Sauter (featured earlier in the thread of posts on this page) and I were in our harnesses with the fall protection gear all set up, attached to our ropes as John ferried stuff up to me on top. We all wore our climbing helmets. Lucas got right to it, bringing us whatever we needed before we knew we needed it. We were installing a giant chase cover on what surely must be the highest chimney in White Rock, NM.

We are proud that we attract accomplished, smart folks like Ben Nuhn to our business. Great people enjoy being a part of the winning team!

(And we now offer health care benefits, along with paid time off to our awesome staff.) 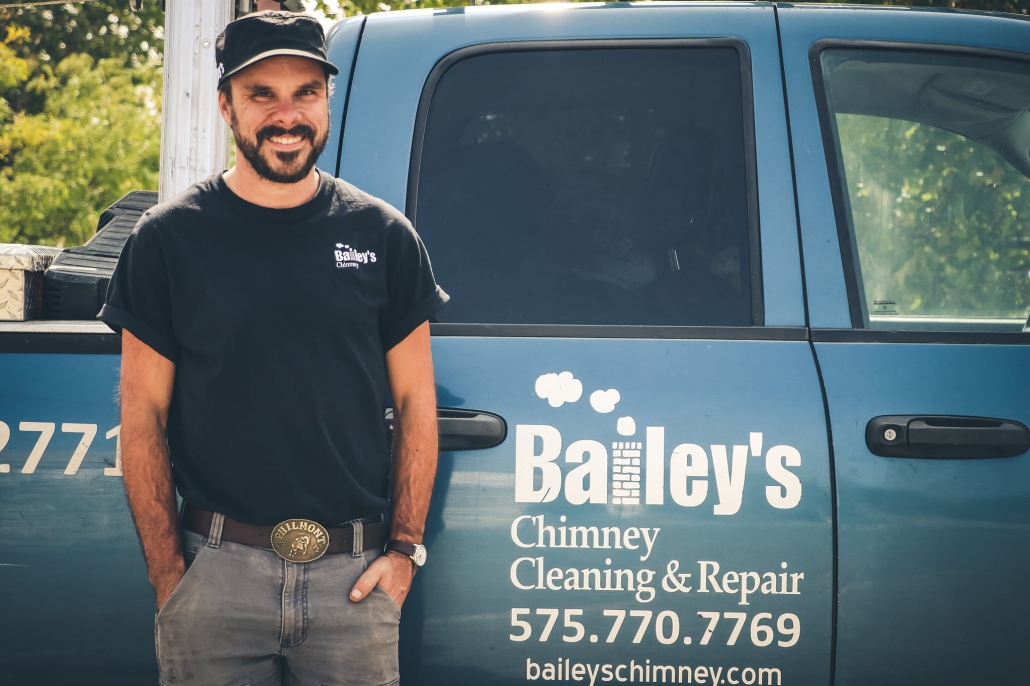 Chris Privette is one of the best technical/construction problem solvers I’ve had the chance to work with. I knew he was a keeper when he and Pat Rael (featured elsewhere in this thread) in a chimney restoration job, had to replace a portion of combustible wood-frame wall with metal studs for the fireplace to meet clearance requirements. Chris figured out a way to remove the wood frame wall without disturbing the exterior plaster–not a single crack. This saved his crew two entire days of labor that would have been needed to replace and match the exterior stucco if we had done it the old fashioned way. Meanwhile, the customer was beyond thrilled that her exterior plaster was unblemished. I stopped by and saw it myself. If I didn’t see it with my own eyes I wouldn’t have believed it could be done.
This is Chris’ third year with Bailey’s, and his first season as leader of a dedicated installation crew. He installs chimney liners, does restorations, installs class A chimney and connectors for wood stoves, and even has prefab fireplace change-out on his upcoming schedule.

Chris is driving biggest, strongest truck in our fleet: a 4×4 Dodge Ram 2500 pickup with crew cab and 8 ft bed. 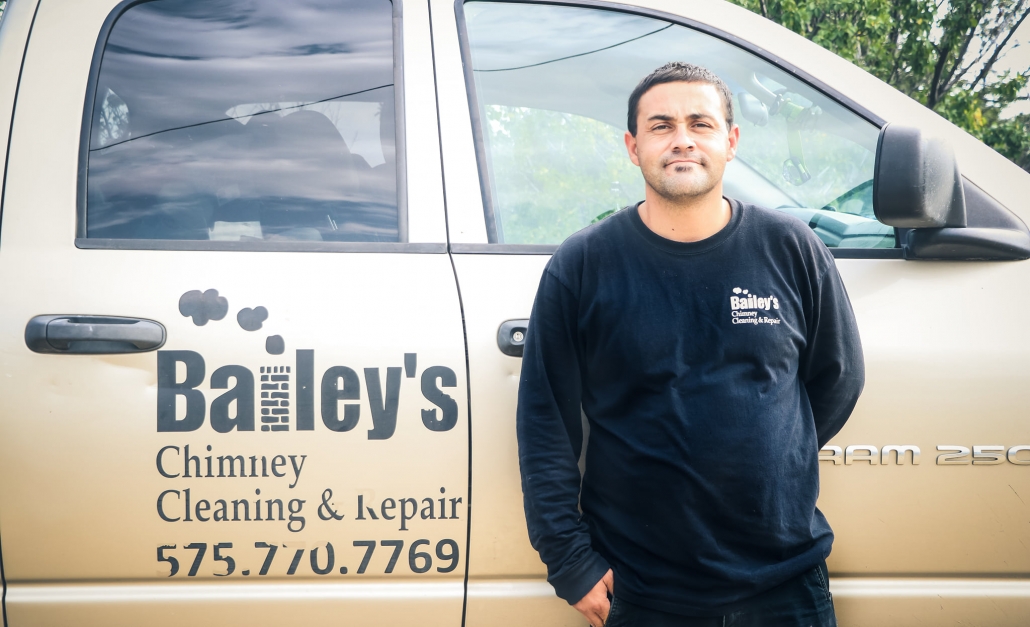 Pat Rael, on the left in the photo below, started at Bailey’s in 2016 as an office assistant. He is now our highest rated, most productive field technician. He recently earned a Bachelor’s degree, graduating summa cum laude. He completed his studies while raising three kids, coaching some of them in Little League all stars. He is also a founder at Prodigy Church in Taos, where he serves as Pastor. He and his lovely wife Menesha (she took this photo) have become expert nutritionists and health experts in recent years. Before Covid, the whole family enjoyed regular jujitsu sessions that they would take part in all together as a family unit.

To Pat’s right is Jared Padilla, one of our newer hires. Jared does a great job as a helper and we are glad to have him on our team.

Pat and Jared are pictured in front of one of the three 4×4 pickups in our fleet that enable us to get to all of our jobs regardless of weather conditions. 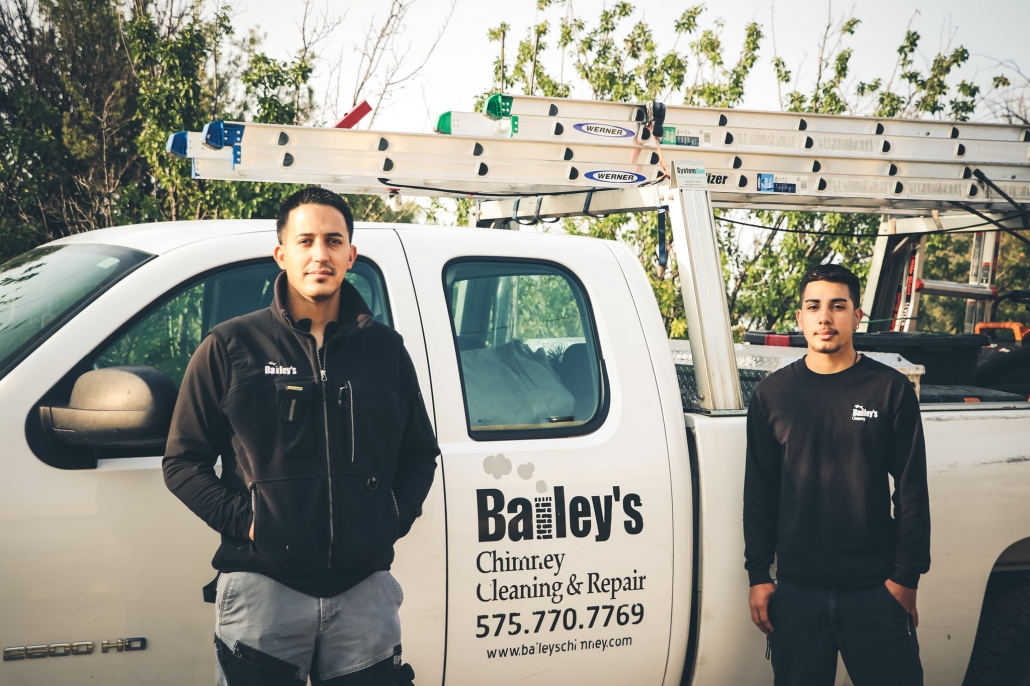 As the winter season heads our way we are ready to get the fires burning again. Here are some great steps to take and things to remember:
Starting That First Fire Of The Season? Is Smoke In Your Face?

Early in the morning on this cold January 1st day of 2013, with the light starting to creep in around the curtain on my bedroom windows, I had the laptop open and I noticed on face book in an old friend’s post that she had blogged every single day in 2012.

I haven’t seen this friend for many years but we used to share our poems with each other a long time ago, and for some reason we found each other to be mutually inspiring, literarily and perhaps in some other ways, when I lived in Salt Lake City as a college student at the U of Utah.

I’ve long since stopped attempting to write poetry.  And honestly, I haven’t written much of anything for about five years.  Back then I had a newspaper column, which when I joined the a national presidential campaign staff in 2008 I–very reluctantly, in fact I was practically kicking and screaming–gave up my column because they (the campaign) said that was the deal and I had to sign a piece of paper saying that I wouldn’t publish anything at all as long as I was working for them, and then after the campaign I was too tired to get it going again, and one thing led to another and I haven’t had any sort of regular writing gig since then.

The experience of working as a political operative changed my life, and I went on to work for several other campaigns after 2008.  Since then, my writing has mostly consisted of memos, Ra-Ra-Let’s-All-Get-Real-Excited-About-This-Campaign-emails, talking points for volunteers, press releases, and even the occasional public statement for a candidate.

That kind of writing, while quick and sort of gratifying in a way that is the exact opposite of thoughtful or insightful, isn’t really the way I ultimately aim to express myself.  And for several reasons I have declined a full-time career as a political operative, and I restarted my chimney business in 2011.

And I suppose this would be as good a time as any to mention that when I got into the chimney business I thought I was in the dirtiest business in the world.  And then I got into politics.

The cat is next to me on the bed.  There is snow on the ground outside.  I already got a fire going in the wood stove from last night’s embers.  My tiny house is nice and warm.

I open the curtain.  The glass sweats against the cold outside, and condensation droplets and moisture fog  it looks like it’ll be a clear day, and there is snow, snow, snow on the ground, because it just kept coming down yesterday, and I was outside shoveling show when the phone started ringing and sure enough on the day of New Years Eve there were some folks whose chimneys had clogged up, and so off I went in four-wheel-drive with the snow coming down steady and slow, and it was fun to climb around on the truck in the snow, wearing snow boots, getting the ladder down off the rack and carrying it over to the house and carrying another ladder up the first ladder and walking across the snowy roof (people ask me how I walk on pitched metal roofs with snow on them–I say “very carefully”) and set that ladder, and adjustable stepladder, on the roof so I can climb up it in the snow and take the clogged chimney cap off to unclog it and then one step at a time, and a while later the customer is all sorted out with a clean chimney, a clean stove, on New Years Eve.

And but today my ski pass is valid again after the xmas-new year blackout period, and so–even though I have work to do in the office, mail to sort through, and filing, and a couple of work proposals to figure up and write–I am going to take today, New Years Day, as a holiday and get my ski gear together, pack some lunch, and hit the slopes.  But I will have my phone with me, and I will be checking voicemails and text messages on the chairlift, so if you have a chimney emergency I can probably take care of you this afternoon.