At the 2017 NCSG trade show, Brian Barnhill told me a story about why his supply company, Barnhill Chimney Supply, is selling a line of climbing helmets made by Petzl. I called him up recently and asked if he would go on the record. He agreed, and told me the whole story over the phone:

“We’ve been pushing safety, we’ve got the safety manual, we have the safety meetings. We’re following the accepted guidelines for our trade to the best of our ability. And that didn’t keep our guy from getting hurt.

“If you listen to safety guys talk, they always say ‘Its not if, but when.’

They also say that a majority of falls occur at the transition point between the ladder and the roof.

“We had a guy who was working on a ranch [single story house], guy’s 6’4”, name’s Blake Giles, he’s been with me for years. It was a low pitch roof. We don’t know what happened, because he doesn’t remember, but there was a fall.

“He hit his forehead and cracked his skull. Long story short, he ends up at the ER and [it seemed like] we might lose Blake. It was terrifying. It’s every business owner’s worst nightmare. There were a lot of days of touch and go.

“Yesterday was his first day back. He was out for a few months with this injury, and it could have killed him. This kind of fall has killed other folks.

“I really did some deep soul searching, I thought ‘Is this worth it?’ I can go do something else to earn a living. Is it worth it to have a business that can get people killed? I really got into a dark place with that. But I came to the conclusion that, firefighters don’t not do their job because it’s dangerous. Their job is to protect people and save lives…

“One of the big things with safety is culture. I can tell people to wear gloves and place their ladders carefully but if there’s not a culture to support it, it doesn’t happen. I wanted to make safety cool, and have good good gear, and give my guys the best gear to be safe with and go help people and continue in this business that we’re passionate about…

I read about the five second rule… It’s if you want to start something new, like say meditating, you don’t start and say ‘I’m gonna do an hour of meditating every day.’ Because you’re probably not gonna do that. But you can say, ‘I’m gonna meditate for five seconds,’ and five seconds turns into more.

“Instead of throwing everything at the guys at once, we asked, what could be the safest thing we could start with, that doesn’t take a lot of training and that we can just do? That was the helmets.

“We picked up a helmet line that’s the lightest, most functional thing which is made for climbers and is certified for what we do.

“I thought we would have some difficulty getting the guys to wear helmets because they just never had to before. The opposite was true. They love them. I think they were ready for it after what happened. I think our guys, they had their own dark nights [after the accident], thinking ‘is this for me?’ They adopted them wholeheartedly.

“Our motto with it is ‘Every roof, every job, every time.’”

“I picked up those helmets because I want to be a part of positive affective change, I want to help change the culture. [Putting on a helmet] is easy to do.

“If you fall and break a leg or an arm, you’re most likely not gonna die from that, but the same blow to the head can kill.

“When folks stopped at our booth, the stories started coming out. There was a whole lot of ‘Me too,’ or ‘We had a fall last year.’

“I think that we all need to wake up and realize that this job is potentially hazardous and we need to gear up to take care of ourselves so we go home to our wives and children and we can show up to help somebody tomorrow.”

In hearing this story, I remembered how when I used to ski as a kid in high school, nobody wore a helmets. We would be going fifty or sixty miles an hour sometimes. People died. Now the vast majority of skiers wear helmets. Same with seatbelts – when I was a kid nobody wore them. Now everybody wears them. The car seat we grew up with our mom sticking her arm out to keep us from slamming into the dashboard. Now people have car seats for kids. I mentioned these things to Barnhill.

“I think in two years, anybody who is anybody in this industry will be requiring their guys to wear helmets,” he said.

Let’s hope so. In the meantime, if you are interested in purchasing helmets for your crew, call Barnhill Chimney Supply at 859-389-8607 or go to www.barnhillchimney.com.

Bailey’s Chimney is the proud recipient of the Angie’s List Super Service Award for 2016! Thank you to our wonderful customers for all of the positive reviews! 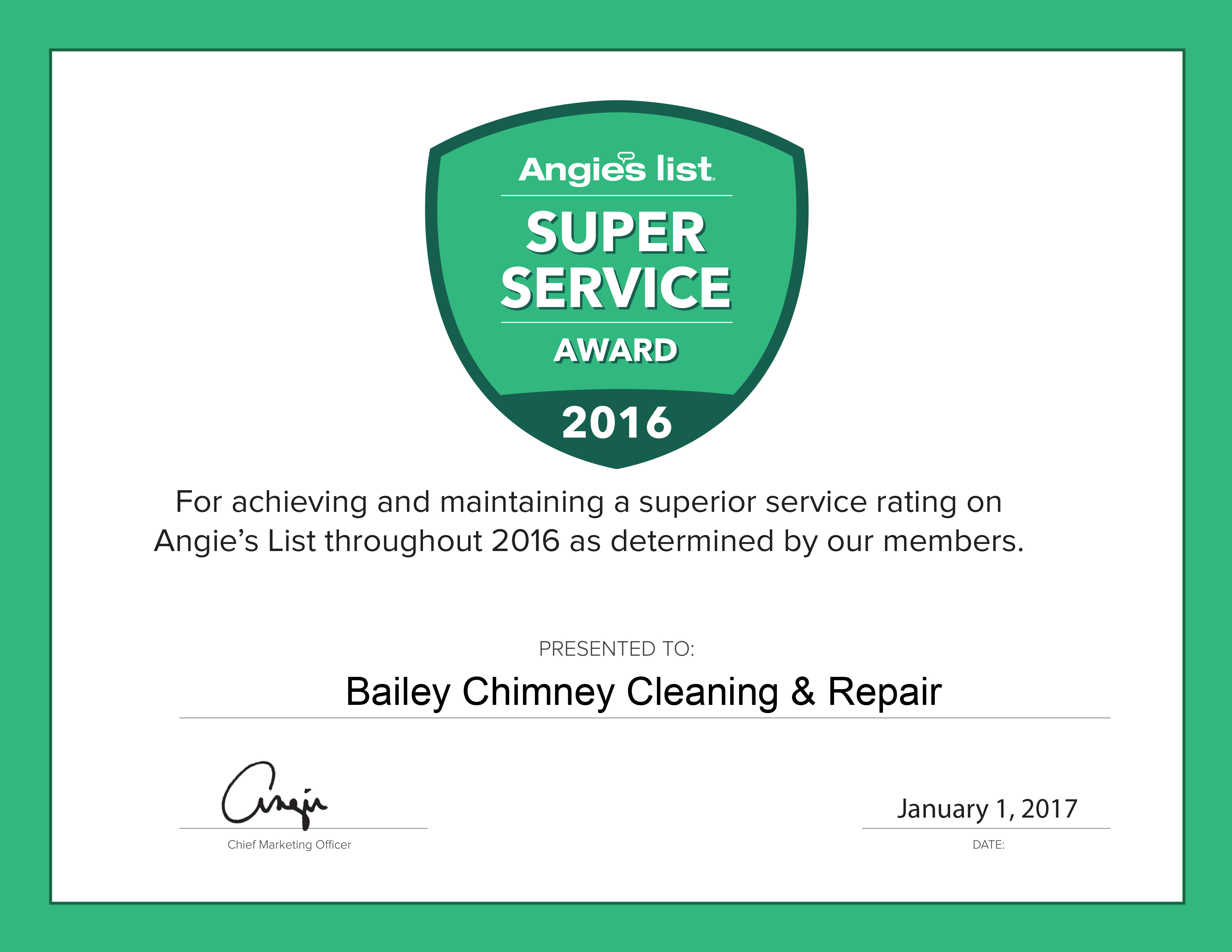